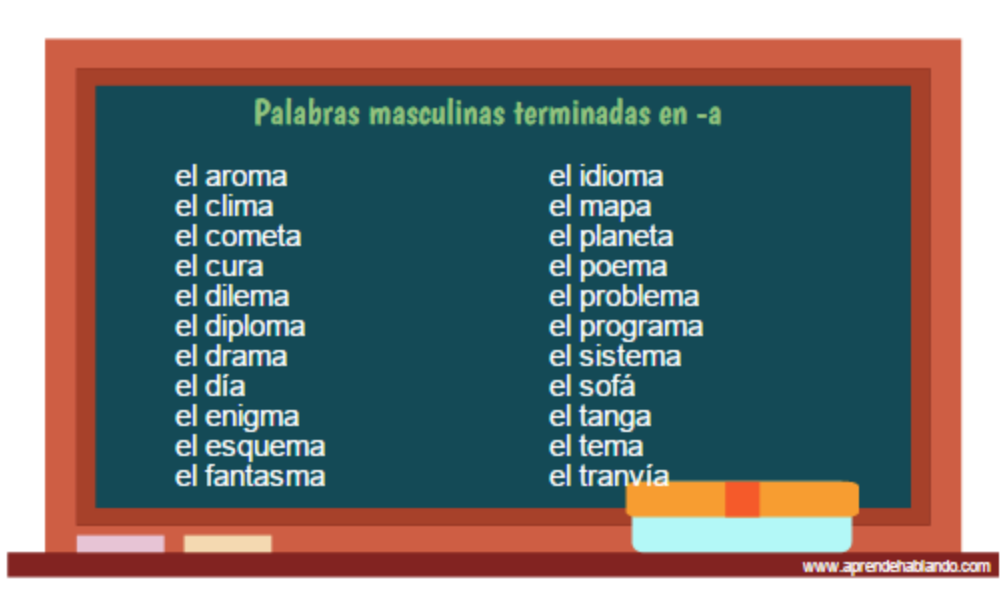 What are the most common male words ending in -A in Spanish?

In this post we bring you the list of the 25 male words ending in -A most common in Spanish. Why? Because most Spanish students make mistakes with the gender of these words.

As a general rule, in Spanish the masculine gender is marked by the ending -O in the names and adjectives. Some examples are: Red or , LiBr or , pilot or , bonit or or Kids or .

On the contrary, the female gender is often identified by the -A final in names and adjectives. For example: cas to , alumn to , Yellow to , bottl to , Chandelier to or teacher to .

This is the reason why many students automatically associate words ending in -A with feminine words.

However, THERE ARE EXCEPTIONS , and many of them are male words ending in -A.

You may wonder if there are any rules to remember these words that do not meet the termination rule -O vs. -TO. The answer is no. The only way to remember them is through the practice and use of them.

Consequently, we have decided to create the list of the 25 male words ending in -A most common in Spanish to help you remember them and how to consult them, if in doubt.

In addition, we have translated the list into English and French . So if any of these languages ​​is yours, it will be very easy. If not, you can learn this comparative grammar between 3 languages ​​and use English as a reference for your language.

Here you have the list with the 26 finished masculine words -A most common in Spanish:

What do you think? Did you know any of them? We hope this material helps you a lot in your learning.

Finally, if you are one of the students who like lists to study, we recommend this post about the most common adverbs in Spanish .

Thanks for reading and see you soon!

HOW TO SPEAK SPANISH